"We're the Sex Pistols of British politics and we've just scored a number one."

...or so says British National Party head and Hugh Grant lookalike, Nick Griffin. Griffin & the BNP have scored not a number one but a number two. An important number two that signifies the two members of their party are now sitting in the European Union Parliament along with additional national and regional representation in the British Parliament. Despite criticism of UK politics moving to the ultra-right, the BNP itself claims to not be a right-wing party. Daniel Hannan, British Conservative Party (aka: Tory) MEP, writes more about their "fusion politics": (1)

The BNP doesn’t call itself Right-wing, of course. It favours nationalisation, higher taxes, protectionism and (though it keeps quiet about this) republicanism. It markets itself as “the Labour Party your parents voted for”. Its manifesto calls for “the selective exclusion of foreign-made goods from British markets and the reduction of foreign imports,” and promises to “restore our economy and land to British ownership” and “to give workers a stake in the success and prosperity of the enterprises..."

Getting back to music, it's possible that Griffin is invoking Johnny Ramone's idea that "punk should be right wing". However, the BNP isn't just some kind of sarcastic right wing, "shock-punk" band such as The Meatmen or Fear. Nor are they a sarcastic, "small 'l' libertarian group such as the Sex Pistols themselves or Rancid Vat.

While Johnny Ramone believed that punk should be a right-wing thing, his own anti-immigrant and "America, fuck yeah!" politics mirror mainstream dolts like Rush Limbaugh or Sean Hannity. "Correct or incorrect" there IS a difference between this thinking (however crazy it may seem) and getting cozy with real fascist political movements and domestic terrorists.

The absurd things that Beck, Limbaugh, and their minions have said about Obama makes them seem like hippies compared to this.

The bigger question is if the BNP really ARE the Sex Pistols of politics then is Griffin the Sid Vicious or Malcom McLaren of the group? And who is their Johnny Rotten, Paul Cook and Steve Jones? Maybe the the National Front's John Tyndal is their Glenn Matlock? If this holds true, it could also mean one of the BNP will end up stabbing his girlfriend in a hotel room and then ODing on heroin. Or maybe as some of these ultra-righters go, will they rot from within?

Griffin's analogy is nothing but absurd. Granted the Sex Pistols wearing swastikas (actually just 1/2 the band) for the shock value is vastly different than the likes of Griffin's right hand man, and EU member from Yorkshire, Andrew Brons. Brons is directly connected with Holocaust denying authors and nail bombers. He has also been seen marching with boneheads shouting "death to Jews". Alluding back to the Pistols ideology, if we only look at Johnny Rotten's politics, you'd find he's a more of a cynical-yet-often on the money, small 'l' libertarian. Plus, Rotten unlike Vicious (cliched, rotting) has like Henry Rollins kept himself doing some very interesting things while keeping themselves in the albiet smaller media spotlight.

Ending on a different note, where DID the BNP come up with this shit logo?

BNP design guy: "I gotta great idea, I saw the PBS logo and thought, 'hey let's merge this with a Def Leppard shirt!' It'll be brilliant!"

advocating a blood-and-soil alternative to communism and capitalism. In it he praised the black separatist Louis Farrakhan, met David Duke, the former leader of the Ku Klux Klan, travelled to Libya at the expense of Colonel Gaddafi and expressed support for Iran's Ayatollah Khomeini – who also had a strong dislike of Jews, women's rights, homosexuals, liberal democracy, international capitalism, Coca-Cola and McDonald's.

2. For more on punk's appropriation of the swastika, see "Punk and the Swastika" here.

The band (Sex Pistols) wore swastikas as well as upside down crosses, pictures of Karl Marx and (Spanish anarchist) Buenaventura Durruti quotes. Funny how no-one ever asks me if they were communists, maybe that's because that particular form of totalitarianism is more accepted? They also wore a lot of different very explicit homosexual images but I have yet to hear anyone ask about that.

This hodge-podge of ideological and sexual asthetics circles back to Malcom McLaren's earlier experiment with the New York Dolls.

One photo show below shows guitarist Johnny Thunders with a swastika 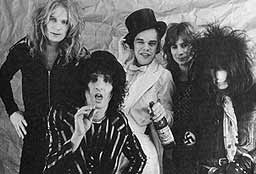 While the next shows them as red patent leather commies. 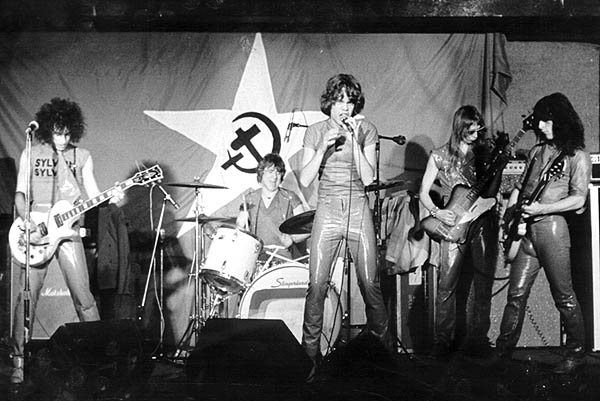 Certainly the Dolls were ALL about gender-bending. Not so much on the upside-down crosses. Lastly, I'm utterly fascinated to find more punk bands to did this sort of thing in an anti-religion sort of way before metal made it code de rigueur.
Posted by Justin "Thunder" Lager at 4:58 PM No comments: Links to this post