Ukrainian Pagan Metallers Kroda were recently attacked by a bunch of Anti-Facist Action activists in Warsaw. The original link regarding Kroda's statement is here. The band makes mention of "telescopic cudgels" which sounds like a band of 60's psych unknowns. Granted, I have way more in common politically with Anti-Fa than with NSBM creeps. However, I don't feel that anti-authoritarian organizations should physically attack a band because they heard some rumors on the fucking Internet. Not to belittle the violent reaction but the protesters did have more than just rumors to go from. (I'm also NOT advocating being passive towards nazis, rather violence towards them only seems to work in self-defense. Attempting to attack them soley because their ideas are absurd (pun intended) is just as dumb as they are. At we can know who these idiots are if they're in public and their patheic, ultra-repetitive slogan will be as boring as they are offensive and really it's best to avoid them directly at all costs.

Back on topic though, Kroda's lyrics are a mixed bag. One forumite on Metal-Archives said that there's apparently some viruently anti-Jewish lyrics in one of their songs. Although, the only things I could find were Ukranian only lyrics that were poorly translated or things that deal with typical but still sketchy nationalism/pride lyrics that a lot of pagan albeit not really fascist or nazi bands use. One such song, "Мак Цвіте (Частина I)", roughly translated as "Mack Crvite Part I" (from the 2005 split with Oprich), falls under this category:
"By our steppes, turks and tartars
On horses like black clouds ride,
And ground breathing burning smell –
Lasso of fires all around,
And hordeman whirls his lasso rope:
He found there living prey – "

Furthermore, the band's statement claims Antifa's ignorance on the topic of NSBM:

"It seems antifa don’t know what is NSBM, if they use this stereotype towards our band. NSBM are bands like DER STURMER or THOR'S HAMMER, for example; i.e. formations where basic themes are political and social aspects, aesthetics of Third Reich etc. But KRODA (even purely stylistics-..wise) is Pagan Metal. In difference from NSBM, in Pagan Metal (just look at the name, it’s obvious) there’s no political component. Lyrical side of Pagan Metal is Antiquity, Traditionalism,.. Ancestral Roots Pride (those able to read – just look at KRODA texts published on our official site). And still we want to say that our group is OUT of modern politics."

Later on, we read:

"Summing up: We call all the listeners, musicians, labels, zines connected with Pagan and Black Metal to answer every antifa boycott of our music and bands with counter boycott. Don’t let them manipulate you! Don’t let them to destroy Pagan Metal subculture and our European traditional culture. Strike them back on psychological and bureaucratic level, as well as by physical action. Gangs of that scum must be recognized as criminal and determined as «outlaw» as they already done it with you for a long time. Guilty will be punished."
That said, their reputation or guilt is directly associated by the fact that bassist/vocalist Ogneslov plays in an NS Black Metal band called Volhv. Kroda also has affiliations with the "NS Heavy Metal/Rock Against Communism" styled group, Seitar from the city of Kyyiv.
Additionally, Kroda is part of Противостояние (or "Opposition), a "union together with Chugaister and the above mentioned Volhv. All three are also aligned with Lut'. All three affiliated bands are White Power/National Socialist. Therefore, it doesn't support their claim that Kroda is "only a pagan metal band". When all your records come out on NSBM labels and all your side bands record NSBM or every bill your on is filled with NSBM/other neo-nazi bands, then it's time to put your waders on 'cause you're knee deep into some brown (shirted) waters.

"...Kroda are an excellent band, but should keep their mouths shut about this stuff, as it not only makes them look hypocritical...but simply foolish. If you put a huge swastika (albeit one made of flowers) in the tray card of an album that has at least two songs directly referring to how glorious it would be to rid Ukraine of Jews, you haven't really got a leg to stand on. "Oh, we're Pagan nationalists, not Nazis" - pull the other one, it's got a balaclava and pepper spray on."

"The problem with most of these bands is that they can't seem to advocate "cultural preservation" without also openly or passively advocating racism and oppression and directly or indirectly glorifying Nazism.

Also, an American (or really any member of a group living in a place where that group is in the majority or plurality or has historical "claim" to the area or has simply managed to dominate other groups in the area) claiming society "forces" whites to embrace other cultures is laughable. American society is thoroughly infused with institutional racism and white privilege and you haven't experienced anything other."
Posted by Justin "Thunder" Lager at 3:04 PM 1 comment: Links to this post 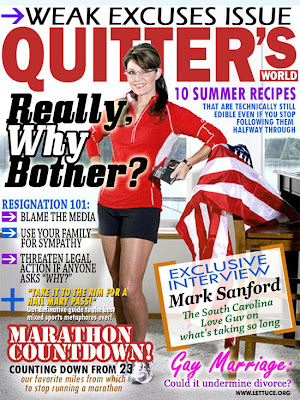 I don't have too much to say about the blithering idiocy of Sarah Palin and her equally pathetic supporters. However, as I told a friend the other night, letting someone as ignorant (and proud of her massive ignorance) and ill-fitting as her take a job of vice-President or (Odin help us) President is equivalent to calling up a baseball player hitting .200 up to the majors. Sure, he's played the game but he doesn't know how to hit off 80% of the pitchers he faces. As for the "mean spirited, sexist comments" about Palin and her dopey family, it's really no different from the comments that Hillary Clinton (who I think is a slightly less noxious but all too often corporate tool) or really any other female politician in the public eye has received. Didn't the Brits call Thatcher a slag or a cunt? Probably likely. Although, I prefer the works of British anarcho-punk instead of obnoxious Trotskyist wankers

So maybe calling Palin a "cunt" isn't too nice. Although a lady friend of mine called her that and really it's calling Palin, the politician, the opportunist, evolution denying, wolf hunting from a helicopter, right wing Christian/exorcist believin' individual a cunt and NOT all women. The best thing for Palin to be is to go down in history like John Anderson and be a footnote of history - better yet a tiny one. And hell, why is ANYONE giving Palin more than 15 seconds of coverage on the news in the middle of 2009? "Unleashed men of sin
Hatred hell within
Sinners hate will die
The Exorcist" - Possessed, 1985
Posted by Justin "Thunder" Lager at 1:42 PM No comments: Links to this post

Heathen Harvest on the NeoFolk Religion and Concept(s)

Heathen Harvest has put together a good analysis of the neo-folk idea that runs the gamut from the misanthropic noise of Boyd Rice to martial pop Laibach to electronic oddness of Psychic TV and what seems to be countless others. While I haven't read the specific Zizek and Foucault writings, this article does a good job in explaining the ideas as opposed to most academic work that all too often "comment upon other commentors". Namely, Zizek's own annoying obsession on Lacan's critique of Marx critique of well, I dunno what the fuck.

I'll be making most posts/pieces about neo-folk in the upcoming weeks & months.
Posted by Justin "Thunder" Lager at 4:15 PM No comments: Links to this post